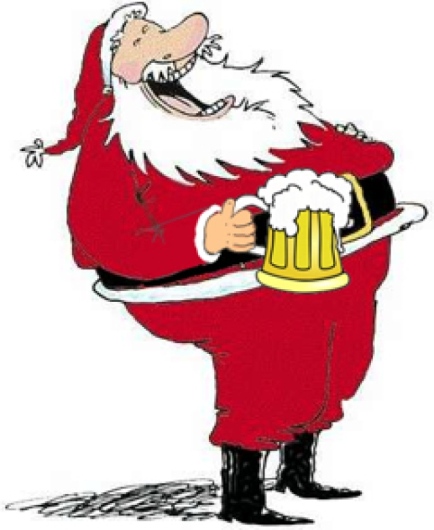 Merry Christmas RanDummies and mighty blogaruu readers! Hope you are still getting your turkey sweats on. While you do, why not enjoy this piece which I wrote for an Irish paper recently. Pants off. Trifle. On!

Next morn. Stephen’s Day. Boxing Day? Not sure what they call it here in L.A. Eyes open. I’m on a couch at Robbie Williams’ house. Awake. Alone. Alive. Stiff back. Slept awkwardly. No sign of Slash. No sign of anyone. All left. Or upstairs. Sleeping. Sensible folk. Unlike me and my dry mouth. Tastes like glue. And so this is Christmas.

Up until a couple of years ago my Christmas Day was always a day of food and family fun back in Cork. Almost like a day of rest. On Christmas night I’d go down to my grandparents’ house in Passage West and eat more food. All my family and relations would be there. Play charades. Computer games. Partake in a quiz. Watch TV. Eat more turkey. Wash it down with trifle. And then go home. Happy as Larry, whoever he may be.

Past two Christmases have been slightly different. Still do the same things. Charades. Quiz. Eat. Turkey. Just not the same as home. Now I can be found in an abode high up in the Hollywood Hills. Rob’s Christmas night party. Come along. Have some fun. Big group of people. All walks of life. Musicians. Actors. Models. Prancers. Producers. Me. Maybe about thirty or forty in total. Not sure. I’m bad with numbers. But between five and a hundred people. Roughly. Mostly expats. One Pat. Handful of Americans. Tiny Tims away from our original homes. All bringing our own Christmas spirit to the party. Keeping the dream alive. Particularly as Rob always make sure there is Guinness in the fridge for me. Mighty host.

Thing is though, Christmas is not that big in L.A. Not at all at all. As in you have to go out of your way to find it. The spirit, anyway. Decorations are up. Christmas offers blared in your face. Fake ho’s all round. So Christmas is on display everywhere. But no one really cares too much. Thanksgiving is their big one. Christmas is more of an after thought. The after birth, you might say.

Added to this, the roasting hot weather doesn’t make it feel too much like Christmas. Perhaps the fact people are apparently not allowed to call it Christmas is another factor. Must call it “The Holidays” in case they offend someone. Huh? Why? Pardon? Tut. Highly odd. As is the lack of hearing Wham and The Pogues on the radio. Maybe the biggest factor for there being zero Christmas buzz. Kind of feels… Hmmm. I won’t say different. Usually that suggests something is worse. As in, if a girl has ever said to you, “Well that’s not usually how I do it. It was, ahem, different…”  do you think she’s implying it’s a good or bad thing? Exactly. Great analogy. Thank you.

Let’s just say that usually Christmas is the time of year when the actual day of the week is irrelevant whereas here in Hollywood, last Christmas Eve felt just like a Thursday. In an attempt to instill some Christmas cheer to the locals, I introduced the mighty 12 Pubs of Christmas to Hollywood. One of my favourite traditions back in Cork. Group of buddies all meet up to go on a pub crawl. Pint per pub. At least twelve. Additional shots are encouraged but optional, of course. Banter levels are always high. Finally: No girls allowed. Lads’ night out and all. One of the best nights of the year. In Cork, at least.

First year I attempted 12 Pubs of Hollywood? Horrendous. Calling a spade a shovel, close to zero interest. Majority of people leave town for Christmas. Those left here were all a tad depressed. Single. Driven. Lonely. Stuck. Hope. Gone. Zero. Christmas.  Spirit. Dodge on. Most folk thought my invite was a spam email as if I was trying to sell them something. Didn’t get it, even after I explained it fully again. This led to me breaking my first rule: No girls allowed. Ergo, mass email sent out to any I knew. Wonderfully received. Again. Most reply with: ‘Who’s this?’ The rest thinking it was a date… ‘Love to meet for a drink. Movie afterwards?’ ‘Sounds awesome, quiet drink, just the two of us!’

In the end it was just my and my friend Charlotte. Two Tiny Timmys. We did also pick up a straggler at the third pub, a Russian guy named Boris who wouldn’t acknowledge that Yugoslavia was no longer a country. At the time it was entertaining. Until we realised nine of the pubs on my planned route turned out to be closed. So we had to listen to him for large chunks without booze being served. To cap the night off, we then got stuck in Hollywood rush hour traffic at midnight, listening to why Yugoslavia will one day rise up again. Now that was a fun night.

Last year things improved a lot. Actually had a group of guys. Americans. English. Embracing the Christmas spirit. Even had a fellow Irish man, Peter, to help me explain the rules over and over again to the rest of them “No, it’s one pint and a thirty minute limit per pub, not one pint in total.” Look, no one said this would be easy. Work in progress. At least we were all dressed up in our dodgy looking Christmas jumpers, or a granny’s Christmas cardigan found in a vintage store in my case. Thank you, Ethel!

Christmas shopping is a tad different here as well. Tried to go one year with Rob. Keep my tradition of ‘waiting-until-Christmas-Eve-to-buy-all-my-presents’ alive. “I’ll meet you outside that shop, you know the one…” Oh yeah, I know the one, see you there. Unfortunately the shop in question has two locations. Rob went to one. I went to the other. Rob got followed and harassed by the paparazzi trying to take his photo. I got followed and harassed by a flurry of Tokyo tourists asking me to take their photo. Great time. Laden with about fifty different Japanese cameras. Cheese! Peace signs! Ha-ha-ha. OK, only forty nine more photos to go… Where are you, Rob?! Mission. Aborted. (That year I ended up giving people the gift of me making a charitable donation in their name. Did not go down too well. Tut.)

Speaking of keeping traditions alive, I do always make sure to still go to Christmas Day Mass. The guilt of my Mum ever finding out that I didn’t make it would be too much. So I go. Catholic guilt, has me hooked for life. First year I went I lost my bearings a tad. Ended up in a Methodist gay and lesbian church. Never knew there was such a branch. Looked the same as the Catholic one. I got out before prayers were said. Lucky escape. Almost worshipped the wrong version of God!

Across the road I go. Look around. This feels more like it. I’m in the right church. Now we’re dancing. Seems like mass at home. Just an amped up version. More open. People taking their worshipping up an odd notch or two as if they were on steroids. In Ireland everyone at Mass looks solemn. (Serious? Annoyed? Polite? Forced?) Here, everyone smiles a lot. Big, huge, white smiles. Joyous delight. Looks like they’re on something. Lucid. Filled with the love of God, no doubt. Bellowing out their prayers. Intense. Strange people.

At one point I’m saying Our Father while holding hands with a clammy old man in a dodgy lop sided wig. I saw the people in front of me holding hands as they raised them up like the priest so thought it was the thing to do with whoever was next to you. Until I copped on that they were a family. Couldn’t shake Wig Man’s hand off of mine though. Tried pretty hard too. Got to a point where he was almost fully facing me. Praying at me. Slowly mouthing words. Ignoring the altar. Lifting my hand up as far as he could reach for some reason. Strange experience.

At least I had going up for Communion as my escape route away from the Wig Man although this led to the priest filling me up full of wine from his chalice when he realized I was Irish (he claimed to be Irish too but blatantly American). So I think that got me drunk. And then mass ended with Wig Man chasing me down the street, asking if I ever modeled before. That old man could move quickly. Have I mentioned Mass is an odd experience here? (I would also later come to know Wig Man as Orgy Joe but now is not the time or place to get into that. It’s in my book.)

Kind of went on a ramble. Back to my overall prevailing point: Christmas in Hollywood is weird. Random. And at times, dumb. Also. I think I slept on one of Slash’s top hats. Say nothing. Obviously. Shh. Subject. Change. Just thought of a joke from earlier: What did Santa say when he saw the Kardashian sisters? Ho, ho, ho! Ba-dum. Thank you.

Special Sale on RanDumb and RanDumber for Christmas. Read on!

Read RanDumber -> SNAP HER UP!

RanDumber for the Kindle -> SNAP ON!

RanDumber in the UK -> GIDDY UP!