A day can make a big difference in L.A. Seven of them can be huge. This time last week I was just starting to get over my freaking out period. The hump was being climbed on and giddied over. Since then, every day has been on the up. Back to the good days of L-Hey. Looking back, you would wonder why bother getting so worked up over small, small issues. A scissors? Some ape. You know 6 months down the line they will mean nothing at all. I know this, yet I was still being an ape. Once an ape… and all that. I seriously do think it was the gin comedown, a drop never again. Now that I’ve moved on from that, I need to get a few things prioritised. Unfortunately today has stagnated big time with the back to basics spoof. Now that things are being ticked off the to-do and get settled list, the slippery slope of bums-ville is creeping upon me. END_OF_DOCUMENT_TOKEN_TO_BE_REPLACED 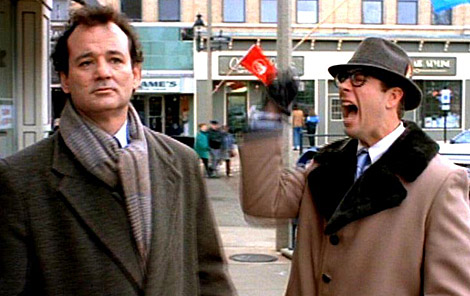 Debates have ensued over whether or not you might want to hear about today. I doubt it. Groundhog day. A re-run of yesterday. Different shovel. Where I just end up, once again, scratching my head in confusion. Is it the people I am dealing with? Or am I, seriously, a bit challenged, mentally? Not much point in re-telling the almost exact same day as yesterday. I don’t think Groundhog Day, the book, would’ve been a great read. Just simply replace “come back tomorrow” with “come back next week” in yesterday’s blogaruu. Great stuff. On the upside, END_OF_DOCUMENT_TOKEN_TO_BE_REPLACED

Writing so far has started off like I would do when studying for exams before. I waste a good few days procrastinating and get nothing done. Particularly during the day, I am more of a night person. Usually, after a week or two of this, the fear kicks in, and I cram it all in the day and night before the exam. However, this is not going to work with the writing. Time to grow up, in the writing world at least, time is a ticking. There was only one reason, after all, why I came here, yet I somehow have developed a mighty to-do list!

So, I have decided to try and help myself out, by naming and shaming the ways I have procrastinated today, doing everything but writing the pilot, in hope that it will, figuratively speaking, slap myself in the head to cop on.

1. Watched Days Of Our Lives.

5. Brought my disposable camera to the shop to get developed.

7. Walking around the apartment a few times, looking for my phone, while on the phone.

9. Collected the photos from the shop.

(As you can quite clearly see, some high levels of procrastinating going on. Don’t worry, I am busy formulating the episode/scenes in my head while doing all this, it is coming along nicely! No need to fret!)

This morning I was woken up thinking the earthquake had come back for seconds. However, only one wall was shaking this time, and it didn’t last quite as long. It must have only been just a tremor, ha, go on the rabbits in the apartment below! Anyways, today was a big, big, big day. After my brief, yet exhilarating, fling with the earthquake yesterday, I was nay so productive. How could I concentrate or focus after the earthquake swept me off my feet like that, it was like something out of a movie! I had planned that today would be my mighty day of work. Included in my plan was to first watch the Ireland – Italy soccer match. This was before I was reminded today that the match was, in fact, on tomorrow, and not today.

After finding out I now had a two hour gap in my meticulously planned out day, I was left with a conundrum – finish (ahem, start) the writing assignments off two hours earlier than planned, or, get a few small things on my to-do list out of the way. To-do on!!!

While having breakfast, I couldn’t find the remote, so sat through an episode of General Hospital. It was pretty horrendous, who was I to judge though, it was only my first episode. So, I watched another 2 episodes to make sure. Still pretty horrendous but at least Chad got out of the coma in the end, wuu huu! After that, I moved on to my laundry. I washed dirty clothes, clean clothes, other peoples clothes, everything and anything. I ironed clothes, folded the washed clothes, refolded t-shirts that were already folded, got some stubborn stains out, I was highly productive! This was going swimmingly well so far.

Next, I decided to head down to the Polish shop and check out the sale they were having on fish today. I bought myself a nice bit of swordfish, first time really trying it I think, thought it was odd that it tasted a bit like licorice and mustard but maybe thats what all swordfish taste like? It was after lunch when I remembered I had forgot to clean my runners, I had better wash the laces by hand, to-do on!!!

Obviously I then moved on to doing some good writing research online, on Spacebook, checking Craigslist for any spoof jobs or new Buckets, downloading music, doing jigs to a few songs, all that productive stuff. I exhausted every possible avenue that I could to avoid doing my homework. For some reason, I felt like I was being punished. For God’s sake, do I have to do the writing? What will happen if I don’t? I’ll be grounded? Fine, ground me. I killed off some more time by thinking of an episode for the Office, and an episode for my new sitcom. I have the outline of them good to go, wuu huu, so at least that was semi-productive. Plus I half thought of a name for my sitcom. If you have any suggestions feel free to horse them on!! All I need to do now for them is type them out, along with the easy task of doing the witty and funny dialogue, era shur isn’t that the easy part! Ha.

Eventually, after kicking my bedroom door a few times and stomping up the stairs, I sat down and started the writing assignments (spoof). Once I started (spoof), obviously, they were grand. I got them done fairly quickly (spoof), covered all I needed to as well, happy enough with them. All of that avoidance for that? I am an ape. At least I got to see Chad wake up.

My next post will be when I am back in L to the Heeeeeeeey. I just got off the phone with her actually. She told me how the Bucket had called around a few times, drunk, with her new man, made a big scene, thank God I wasn’t there for that. It was very emotional. Here’s a song I played to cheer her up… Dance Tonight by Paul McCartney