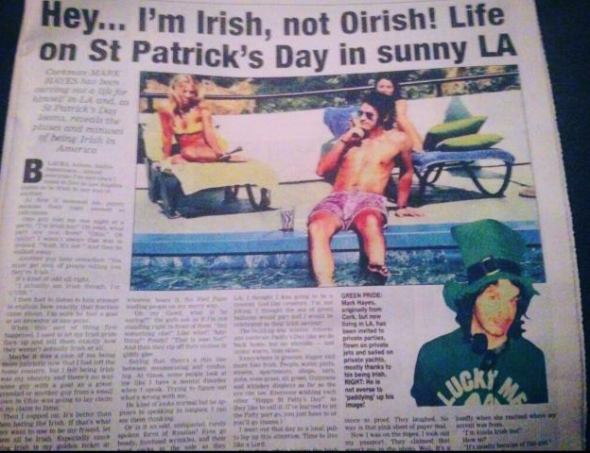 Can’t beat being on the front page of a newspaper wearing a leprechaun hat. Couldn’t find a version online so here’s the original gibber. Recent radio interview too where I ramble on and on and on. New book PREDUMB out soon. Narcissistic levels reaching new high.

Blacks, whites, Asians, Native Americans, almost everyone I’ve met since I came to L.A. claims to be Irish in one way or another. At first it annoyed me purely because their logic was so ridiculous.

One guy told me one night at a party “I’m Irish too!” Oh yeah, what part are you from? “Ohio.” Oh really? I wasn’t aware that was in Ireland. “Yeah, it’s not.” And then he walked away. 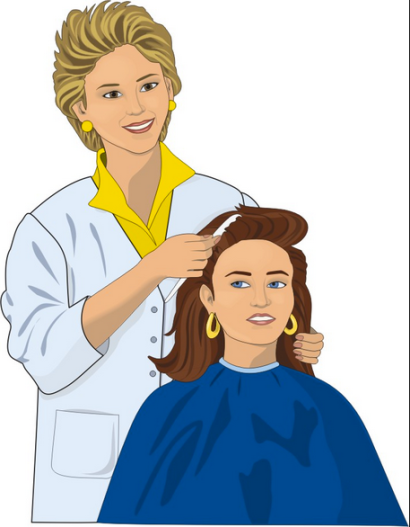 I had been dreading going into fifth year purely down to Dirk coming to stay with me. The German students were due back for two weeks at the start of October for their portion of student exchange. At least we got two weeks off class at the start of the year to go do more work experience.

Despite the fact I was now sixteen, meant to be more mature and entering an important year of school, dossing off class was always a highly attractive incentive. Still, the thought of hanging around with Dirk and having him in my house was depressing. If only I had a secret indoor pool and gym area to keep hidden from him. Alas, I didn’t. The gods did smile down on me though.

Two weeks before they were due to arrive our German teacher Ms. O’ Golden informed me that Dirk had failed his summer exams and his repeats. This would mean Dirk had to repeat the entire year. He wouldn’t be able to come stay with me in Ireland.

Did a victory lap of the classroom in celebration. Couldn’t believe my luck. The Mirk and Dirk Show had been canceled!

Ms. O’ Golden waited until I calmed down before telling me another boy had asked to take his place, Marcus.

“Oh yeah, I remember him. He got us tickets to the soccer game.”

Marcus reminded me a bit of Barney, the purple dinosaur children’s character. Tall and goofy, with a big fluffy head of light brown hair that just bobbed around as he spoke with a smile.  Good laugh when I met him that time at the soccer game before. Still though, do I want him staying with me?

“So would you mind if he stayed with you instead? It’s up to you entirely, you’re not obliged.”

“In that case I would mind. I prefer to have no one stay with me.”

Very particular, at the time. Liked to END_OF_DOCUMENT_TOKEN_TO_BE_REPLACED

The Boys Are Back In Town – Thin Lizzy

Great news RanDummies and randumb readers: I’ve a new book on the way! It is called,

PreDumb – Before I Came To LA

Fabulous tales from growing up in Ireland and the likes. Out in March I think. Perfect for your Paddy’s Day celebrations. Prepare for book whuring to commence soon. Giddy up!

Not sure where my dose of self-diagnosed claustrophobia came from exactly. Maybe from when I was in fifth class in primary school. And for some reason a group of us were put in class with people in sixth class. The Special Ones, as we called ourselves. Too smart for fifth class! As a result, we were let run free on END_OF_DOCUMENT_TOKEN_TO_BE_REPLACED