In case you did not know: Having a book turns you into the biggest whure of all time. Media kind, at least. Probably the horrifically annoying kind as well. Still though, needs be. Whure on. Word out. Mouths open. Eyes reading. Unsurprisingly, it is a bucket of fun. Being on tour. Acting the whure. Past two weeks have been giddy up and go. From dodgy Armenians, to Japanese comic books, to seeing, to believing, to readings, to signings, to launches, to radio, to press, to photos, to tabloids, to broupies, to selling out, to sold out, to directors, to boxes, to randomly walking past Woody Harrelson in a hotel lobby, chilling on a couch, reading my book. Shoes off, book on. As you do. To all that. Along with everything which may somehow be in between all of that gibberish. Pretty much non-stop. Big buckets of dumb fun, to be true. To. Be. True. Also quite time consuming. Being a whure. Out on tour. Meaning flogging my collection of words has lead to a drying up of blogaruus. Not good for the second book. Until time can be found, a filler of music shall have to duu. On the plus side, these songs are all pre-tty savage. Anyways, enough talk, more music!

1. The Man Comes Around – Johnny Cash

Random Useless Fact: Johnny Cash was also an author. Amongst others, penned a Christian Novel… Man in White. See. Anyone can do it.

R.U.F: Paul Simon wrote this on a trip to Graceland following his divorce from actress Carrie Fisher. 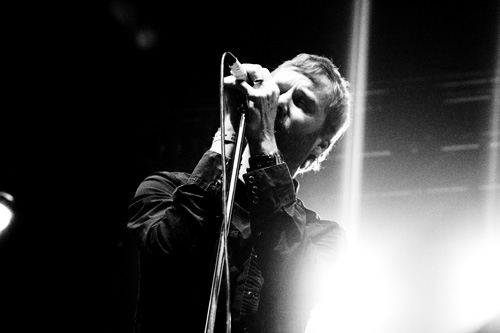 R.U.F: Lead singer has a bucket of nicknames including the Dark Lord, the Naysayer, Mumbleberry Pie, Mr. Knee Jerk, Mr. Sony Headphones and the Echo Chamber.

4. To Build A Home – The Cinematic Orchestra

R.U.F: This song has appeared on every single TV drama ever created. Almost.

R.U.F: When they released ‘Intervention’ it could be heard by calling (866) NEON-BIBLE, extension number 7777.