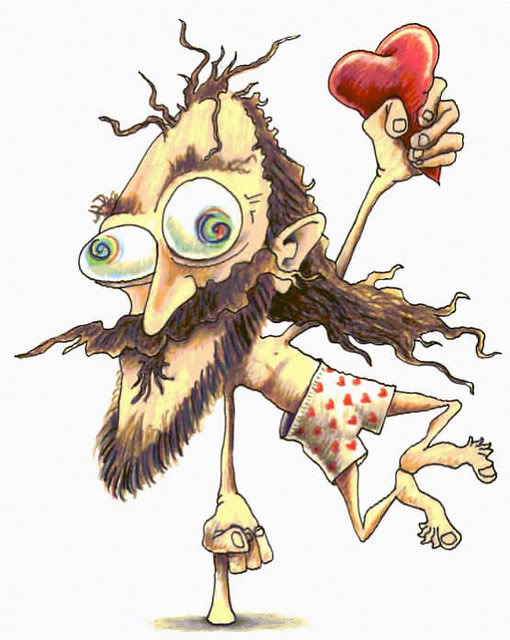 If you’re going to be crazy,

you have to get paid for it

or else you’re going to be locked up.

A mighty quote I happened to read yesterday. Hunter S. Good logic behind his madness. Lately, the more I speak to people that work normal hours, the more I get the impression they think I’m losing my logic. Going to bed when it’s bright. Getting up when it’s dark. Curtains only needing to be opened for about a ten minute period. That’s crazy. Would you not try to sort it out? Why don’t you change your routine?! Makes far more sense! I can see their logic. Of how it looks illogical. However, there is logic behind the madness. Which my buddy verbalised today to me. Day. Time. People. Awake. Night. Time. People. Asleep. Less distractions. More time to write. See. Logic. Dumb by day. Alive at night.

Laziness is the root of all evil. Firm believer. Now beginning to think that perhaps logic might be the root of some of my problems too though. Maybe coming from the maths’ side of my brain’s family. Maths. Problems. Solutions. Logic. So my brain does actually see the logic in things. Which is good. Just not all the time. A routine has been developing on a nightly basis. Sit down. Write. Brutal. Nothing worthwhile. At the start. Which is fine. Could be lazy. Just go with that. However. I know there is good stuff in my head. Problem. It’s way at the back. And has to wade through a marsh of messy dumbness in order to push itself to the front. Stories taking their time to come out as you might want them. Reach a point halfway through the marsh. Slightly closer to the back, than the front. Takes a breather. Decides what to do? Plough on? Or just go back?

This breather is usually when Logic shows up. With a buddy. Doubt. Who is just a muppet of a man. Logic, why do you always bring him to the party? I told you I can’t stand him. Appears at the worst times. Out to cripple. Logic stands up for his buddy. Think about it, logically… Why should… ? Really what’s… ? Who would… ? Just leave the doubt come in! Thankfully, after a good old battle… Doubt, get the funk out.  Strong old funk. Finally got rid of him. Decided it was time to dominate the Doubt from now on. Before it even shows up. Took out my ruler. Came up with 10 gibberish writing rules. Here they blow…

6. Say What You Really Think. Go For It.

May seem like certain ones overlap in places. However, as they are, these rules work well for me. Clarity. Phrasing triggers off sparks. Donkey. On. Stick to them. Doubt won’t show up. Keep me sane. On track.

Then again, they could be the ramblings of an ape. Hard to tell in L.A at times. Who exactly is crazy. Here is a prime example. Walking to the laundry place earlier. Walked past some dude flailing his arms. Shouting at me. Asking me for money. Or a cigarette. Homeless dude. Few yards further down the street, I was greeted by two girls. Flailing their arms. Shouting at me. Asking me what I was doing. Wasn’t I cute? Did I have a light? Eh, no. That homeless dude probably does though. Which is when they stopped flailing. Stopped looking through or past me. Looked oddly at me. And told me they were just rehearsing for a scene they had for class. In the acting school. Around the corner from me. Oh right.

Although, the main difference there is that the girls were paying to act crazy. Neither parties were being paid. And the homeless dude seemed far more sane. More coherent flailing of the arms at least. Although I did meet far weirder on that little excursion. The dude in the laundry place. Who looked like a Hells Angel. Big. Burly. Mustache. Leather jacket. Staring at me. While I folded my clothes. Staring at me. While he rubbed his crotch. Not looking away when I saw him. Asking him was he alright? Replying in a high squeal. That he was very alright. Ok. Alright then. Nutter. I bid you, a duu.

Pretty sure he took a couple of socks of mine actually. Very odd socks left. Although that is a wild accusation. I might be wrong. Might just be nuts. L.A. Hard to tell. Songs on…

This Too Shall Pass – OK Go

2 thoughts on “Crazy In Logic”