Nine times out of ten, I seem to get on well with Mexican people. Pretty sure this is down to my knowledge and enthusiasm for Jorge Campos. Great goalkeeper. Even better name. Yor. Gee. Yoooor. Geeeee. Nine times out of ten, this makes an instant connection. Breaks through the barrier of a lack of Spanish/English that might present itself, and usually the conversation is finished with a big high five in the name of Jorge. One time out of ten the guy is just a chump. But that’s another boring story. Although now there appears to be another time where I am lead to believe the person is from Mexico. But actually is not. And cleans me out.

To be honest, I don’t really agree with the whole cleaner lady set-up. Getting someone in to clean up after me doesn’t feel right. Cleaning keeps me busy. Makes me feel like I’m contributing. I can clean up myself. If I ever reach the laziness levels where I actually need a cleaning lady, then I’m in trouble. However, seeing as it’s the done thing here, and great value for the money, a cleaner lady was hired yesterday to do a monthly clean. Terry. The Mexican cleaning lady. Who loved Jorge Campos. And wanted Mexico to win the World Cup. As she was Mexican. But actually turned out to be from Salvador. Irrelevant part of the story to be true.

Anyways, woke up, went downstairs, had some porridge and a chat with Terry about Jorge. Usual carry on. Got on well. She offered to clean my bowl. Told her it was ok. My bowl, my mess, don’t worry about it. But she was here to clean. No it’s cool, thanks but I’ll do it, you relax. Clean off. Perhaps me being normal (to say I was being nice is a stretch in my book, just normal, clean my own stuff) made her slip into the comfort zone too much. While Terry went and cleaned upstairs, I decided to make some scrambled eggs for myself. Except she never made it upstairs. Instead stayed close by and started to watch me making eggs. Like a puppy might look at whatever gives it hungry eyes. Saying nothing but implying everything. Initially, I was a bit too tired to cop on. When Terry started to ask repeatedly what else I was going to make with the eggs, I slowly figured something was brewing.

“Will you have tomatoes with the eggs?” Ehh, no, just the eggs. Jesus, I’m tired enough Terry. Go on the Yorge! But yeah, just eggs. “Maybe a little bit of salsa with the eggs?” No, just the eggs I’d say, did Mexico make the World Cup by the way? “You should put some more pepper in the eggs. Do you know what you’re doing?” Yes, they’re just scrambled eggs, Jorge style! By now Terry was trying to stir my eggs around the pot, brushing me aside. Slowly copping on that she might like eggs. Stupidly asking if eggs were a popular dish in Mexico (a dumb question no matter the circumstances). Do you eat many eggs yourself? Are you a fan of eggs? Terry, do you like eggs? She saw my weakness. Even though I had only put enough on for myself, I knew I had to offer. Cornered. A deafening silence. Game of chicken. With eggs. Me cracking first. I’ll just offer quickly. She’ll say no. Here to clean. Would you like some eggs Terry or are you too bus… before I could finish, Terry was hunting down bread for the toast.

“I love eggs. And toast. With tomatoes. Ketchup. And salsa. And a cup of coffee. Are you sure you want to make that for me?” Well to be honest now Terry I’m not too sure what’s going on, say what now? It would appear you’re putting on some toast for yourself. Can you have two slices? Work away, Ter. In for a penny and all that. No I’m fine, just having the eggs on their own. Oh, you wanted the third slice for yourself? The toaster will only fit two, but if you want a third, then who am I to say no?

Somehow, Terry had her plate of toast and cup of coffee ready before the eggs were scrambled up. My intention was to split the eggs between us. Maybe have mine as the more equal of the two halves. Dishing out a scoop to Terry first to be polite. With Terry indicating she’d like a bit on each slice of toast. Three slices. Three scoops. Barely a forkful left for myself. Not too happy about this Terry. You seem content with your eggs, toast and cup of coffee though. Fine, here, you take all this portion, I’ll make a fresh batch for myself. Oh, the job, only one egg left. And, even better, you’ve finished off the milk in your monster cup of coffee. And the tall glass of milk you took with it. Looks like I’ll just drink this raw egg on it’s own. Great work Terry, you cleaned me out. Eggs, milk, the lot.

How are the eggs by the way? “Ok.” Only ok? “Yes, I said only ok. You needed some oil in them. You are too skinny. You need oil to fatten you up.” Cheers for that Terry. At least you’re honest. Somehow, Terry and I had switched roles. She was sitting at the table. Eating my food. I was standing at the sink. Cleaning her plate. Don’t worry either about the bits of egg you dropped everywhere. Or the splotches of ketchup all over the place. I’ll clean it up, Terry. My bowl, your mess. Now I remember the real reason I’m not a fan of hiring a cleaner. Invariably, I end up cleaning up after them.

Terry on! Sound lady! En ce moment, it is quite late. After eating a few prunes tonight. Along with dates and the likes. I’ll have to write about that soon, funny enough. Not sure what to make of all the prunes. Song on… 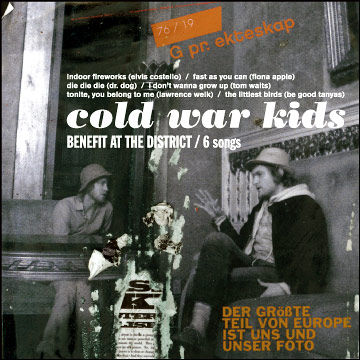 Audience Of One – Cold War Kids