Ever read the quote this?

Don’t major in the minor.

Well, either way you just did. Good old quote, to be true. Don’t get hung up on the small things, I do suppose. Which is why I’ll keep this blogaruu all about who’s won the Kindle and not about trivial stuff that’s happened to me this week.

Particularly as no one would be bothered to hear me go on about what happened at the gym last night. You know, when I walked in and was greeted by a dog staring at me. Not sure what kind of dog it was. Kind of had a pug head, with a pitbull body. Pugball, let’s call him. Odd enough that he was in the gym. Quiet in there. Only one other guy on a treadmill. Pugbull’s owner. Old grey haired Woody Allen looking guy. Almost having a heart attack doing a slow jog. Weird noises coming out of him.

Anyway, I could see the dog was a tubby little guy. Slow moving. So it took him a while to get over to me. Hello there little doggy, how’s it going- Not too well, it would seem. As soon as he got close enough to me, his little legs started moving and his jaw started barking. Rarrarwrwrarrarar. Oh balls. Some dogs really don’t like me. They seem to think I’m the devil or something. Pugball is one of those.

At first I smile and put out my hand to run Pugball. Bad call. Little feck starts going mental at me. Snarling. Barking. Jumping. I look up at the owner. Still shouting away. Pugball is going for me now. So I obviously run. I’m a no rabies kind of guy. Off I scamper. Down the gym. Luckily I manage to jump onto a treadmill and push go in one swift movement. Pugball moves his fat little legs as quick as he can. Keeps barking as he makes his way over. Until now he’s next to the treadmill. Barking for dear life. But freaked out by the treadmill. My saviour.

Now I’m sprinting (not sure why but I felt need to run faster, felt safer perhaps). Sprinting and calling out to the owner. Hi… Hello… Howdy! Is this your dog? Hello! BUDDY! Eventually I get his attention. Looks towards me. Big pink head up on him. Seems like he’s about to keel over. Just looking at me in pain.

Here, eh, is this your dog?

‘Sorry, is he bothering you?’

Emmm. He is. Barking and chasing and kind of angry at me.  Could you get him?

Owner came over and took Pugbull away. Smiled. Went back to the treadmill. I went on my merry way. And wondered if that was Tourette’s that he had? Why was he calling out? Must be Tourette’s. Although I think all he shouted after that was: HA! F**K YOU! YEAH!

So that was nice. But only a minor event. So I won’t be blowing on about it. Nay. Kindle winner on.

Although speaking of winners, I would not recommend draining your car battery down to almost zero. Some dose. Some clown. Pump up the lights, radio, A/C, heater, car charger, toaster and anything else I can fit! Realised this when I left it overnight. Came back. Dead as a doornail. I’m clueless about cars. My track record involves me letting cars run out of petrol, and then cursing them for breaking down. No clue what’s wrong this time around. Time to get wise. Google diagnosis all the way. Hmm. I think my car has herpes? Seriously. Zero clue.

Leave it be. Next night. Come back. Manage to get it going. Drove it out of my parking garage. Pulled out onto the road, halfway down a hill, stopped for a second to wonder where I should go with it, mulled for too long, my foot slipped off the clutch, car slipped out of gear, stalled and died a death once more. Balls.

At least I had a secret weapon for getting help: Hot blonde. Unfortunately, could only drive automatic. But claimed she was very strong when needed. Tried to push my car back up the hill so I could reverse it in gear back to the driveway. Almost crushed her within two seconds. End of the that. Thankfully a passer by saw we were stuck. By we, I mean she. Good Samaritan pulls up. Asks if she’s OK.  He’s good with cars. Maybe he could get it go- I jump out of the car. Cheers boss!

Anyway, he got it going. I parked it back in the garage. Did some more Google diagnostics with my buddy Chowder. Came to the conclusion I needed a new starter. Scientific approach to this conclusion.

Chowder emails from me work, having not seen the car since it cut out…

‘Do your lights still turn on?’

Yes. They do now. Radio turns on too.

‘Could be your starter…?’

Down I go to the car. Happens to be a roadside assistance guy in the parking garage helping out another car who has a dead battery. We are all clowns, it seems. I ask him if he could try the same on mine. Sound man. He does. No joy. Confirms the diagnosis: Thinks it might be your starter.

Quickly phone Chowder: We were right! It wasn’t herpes, it was the starter!

Now my only problem is getting the car to a mechanic to sort it out. AAA, how’s it going? Tow on. So the guy comes out to tow it. Asks to take a look at it. Thinks it’s the battery. I tell him no no, it’s the starter. He attaches the jump leads. Turn on the engine. And the beast is back up and running. Oh. It is the battery? Just needed a big charge, not a portable charger like the other guy had? Yes. You just managed to drain the battery fully almost to the very end. Well done. Cheers!

So I drive it to the garage nearby me. Pull up. Turn off the engine. Mechanic tells me I must drive it up closer, away from the gas pumps. Oh balls. Car won’t start again. Mechanic shakes his head. Let’s just push it up. So now we’re both pushing. Kind of struggling. The garage is weirdly hilly in such a small spot. Some randumb guy at the petrol pump offers to help. Cheers boss-

Hmmm. I think I know him. Well, know of him. Savage Bentley. Soulful R&B head. Smooth tones.  Looks like him. Wearing sunglasses so not fully sure. But. I think that’s John Legend helping me push my car! I’m too busy heaving and wheezing to say anything. Push push push. We get it into the mechanic. I turn to John Legend and whip out the mighty:

Cheers boss, thanks for the help, you’re a legend.

He laughs. Says no problem. And then I wait for him to say back:

No Mark, you’re the legend!

Alas. Nay. Just hops into his Bentley. Drives off. And I get my battery replaced.

So as I was saying, all that trivial stuff shall not be delved into here. No majoring in the minor. Quiet old week. Reminds me of this other quote I read:

Be boring. (It’s the only way to get work done.)

This is tres true. Applying this to my finishing up book two endeavours as we speak. Some people are not a fan of this way. Not being available can be a dose. I was called a grandpa recently for turning down an event invite. My bad. But. Grandad on. Seeing as I am mere hours away from finishing her up fully. Won’t be in time for Christmas, unfortunately, but I shall horse some preview chapters up here for free soon for you all to read! More on that soon. (Maybe tomorrow!)

Where was I… Oh yeah… And the Kinner is… Debbie! 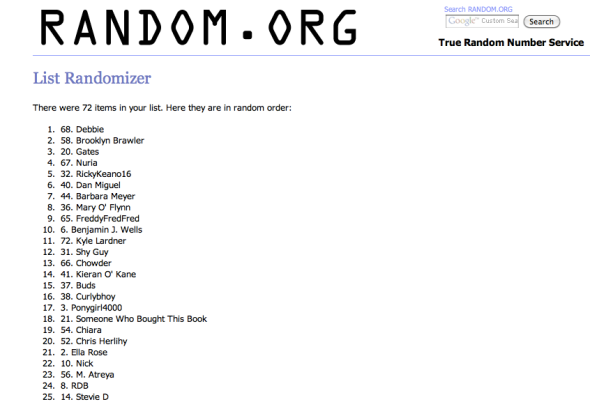 Debbie, get in touch. In case you were wondering how it was picked, I took all the names of the Amazon reviewers and put them into Random.org who shuffled them up and randomly rearranged. Whoever came out as number one… Kinner! Here  are the rest of the entries, just so you can see it was a fair randumb draw… 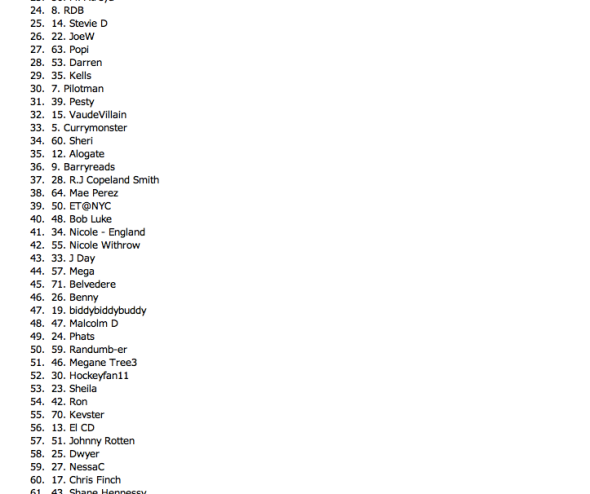 Don’t fret if you didn’t win this time around. More giveaways to come. Preview books. Gadgets. Hope. Joy. The works! Now time to finish this book. Good duck! Actually, one last gibber. Weird dream the other night. At an Irish cheile. Everyone speaking Spanish. Then I woke up and heard the cleaning maid talking outside my door. Listening to this song on her little ghetto blaster. Great story…

4 thoughts on “And The Kinner Is… (Kindle Winner. Thank You.)”