Here be an article I wrote that was in the Examiner last week. Front page too. Wuu.

Imagine you are a fish, swimming in an ocean filled to the brim with other fish who are a lot like you but better in many ways. And instead of not wanting to be caught, you, the fish, are desperate to be reeled in by the fisherman. “Cast me, cast me!” you plead with your eyes as the fisherman toys with you in his net. “To keep and cast or to be thrown back in the ocean with all the other duds?” the fisherman asks himself as he examines you up and down like a piece of meat. Imagine all that – Welcome to the wonderful world of Hollywood auditions!

So you’re out one night in a Hollywood bar. You meet a manager. He nods and laughs at all your jokes. Hypes you up to yourself. “You should be in this, in that, in all of those!” Interesting, you nod back, ignoring the fact this manager has already introduced you to people as “My new client from Finland” and “Hottest comedian in Iceland!” Ignore that. Just focus on the large sums of money he mentioned you would get for little work, if you get the part. So you nod your head and go along for the ride. (Pretty sure that’s how many people end up in porn.)

My first audition was to be the face of a well-known rum beverage. This would’ve involved being paid ridiculous money to be flown down to Rio de Janeiro for the shoot (two days work), followed by the chance to do a series of them all over the world. How bad.

They’re looking for a guy who could do a Scottish accent. I can do that, ochaye cannae wee one! Something along those lines. Also looking for a guy who looks like he might be in Highlander or Gladiator. Hmm. Stretching it but we’ll see. Asked if I could wear a kilt and a tight t-shirt to the audition. No kilt, so shorts on. No tight-tight t-shirt, so normal will have to do. Good start.

Off I go. Find the casting house hidden in Hollywood. Stroll into the waiting room full of high hopes only to see the whole place is full of better looking versions of me, each person with a physical feature that makes them look like you, just after going a round with a plastic surgeon. Must be how cows feel penned in with genetically modified cows.

Stand. Sit. Wait. Feel like a fish out of water. A door opens. Casting director comes out, followed by one guy who looks like he just stepped out of a Calvin Klein ad and another guy who just stepped off the set of the movie 300. Calvin Klein guy is putting back on his top. Hmm. That’s weird. Director calls out my name. In I go. Hear another name. Apparently we’ve been paired up. Calvin’s twin brother is called in as well. Oh great.

So we’re in the audition room. Grey. White. Modern. Well lit. Casting director runs through the gibber for the ad.

“We’ll have you sit here. Pretend you’re getting a tattoo. Stand there. Pretend this is happening. Girls are eyeing you up. Salute back. Smile. Done. Sound good? It does. Great.”

So I stand on an X on the ground. Start saying my name to the camera. As I do, the casting director shouts out,

Calvin next to me whips his off instantly, steroid chiseled body looking like Brad Pitt in Fight Club. Good for you, Calvin. I’m still standing there asking myself why I’ve never considered pectoral implants before now and also what the funk am I doing here again? As if he can read my mind the casting director shouts out,

“So you guys know the pay, right?”

“And if you’re picked you have a valid passport that will let you travel to Brazil and around the world? Gotta love the beach commercials.”

Well when he puts it like that… Off comes the top. Down at the Copa, Copacabana starts playing in my head. Beach on! Although now I feel like a right old piece of meat. Look over at Calvin. He’s been working out his whole life for this. I’ve been boozing all last night not knowing this. Try to adjust my posture. Shoulders up. Shoulders out. Shoulders in? Shoulders back? Can’t remember. Exhale and slump. Shoulders down. And – “ACTION!”

So we sit in the chairs. Pretend like we’re getting a tattoo done but too cool to show the pain. Then stand. Now we’re blagging our way into a bar. Topless. Then walk over to the bar. Pick up the two glasses filled with fake booze. Look around. See a couple of girls checking us out. Look over at them (the thermostat on the wall). Smile. Salute our glasses. This is great.

Casting director wants to do a close up on me smiling. “Smile subtly but impress them but don’t be too cool but show you’re interested.” Oh right. I know that look exactly. Great direction. Give some sort of a smile. Says the same to Calvin next to me. Calvin adds in a couple of pec shrugs. I try to make my nipples move in sync but no joy. Calvin might have the edge.

Director asks me to do a bigger smile now this time. “Still be cool. But not too cool. Mid cool.” OK? Smile. “Bigger, more teeth.” OK. Cheesy grin. “BIGGER MARK, SHOW ME THE TEETH.” OK! Like a horse flashing his choppers, I push and grind and smile and flash and spit teeth at him. It’s a horrendous smile, what I like to call my paedophile smile. Awkward. Pained. Topless. Face is hurting me. And, we’re done. Thanks? No thanks, OK.

Out the door we go. Standing half-naked in a corridor. All the other fish looking back at me in disgust. Mighty. Dress myself and run off out the door crying. Still waiting for the call back but I think I got it (I believe in the power of feeling). Looking forward to Rio.

Still yet to ever actually get any of these parts but that’s not the point. The point is that I needed to figure out what casting is all about. See, I’ve been shooting a pilot presentation for my own show RanDumb: The Adventures of an Irish Guy in L.A. Which means that now, the fish has become the fisherman. There’s a twist in the tale.

I must say, it’s very tough being the fisherman. You’d be surprised at how many good-looking actresses love fishermen, at least the Hollywood kind. So as a wise fish once said: Cast on! 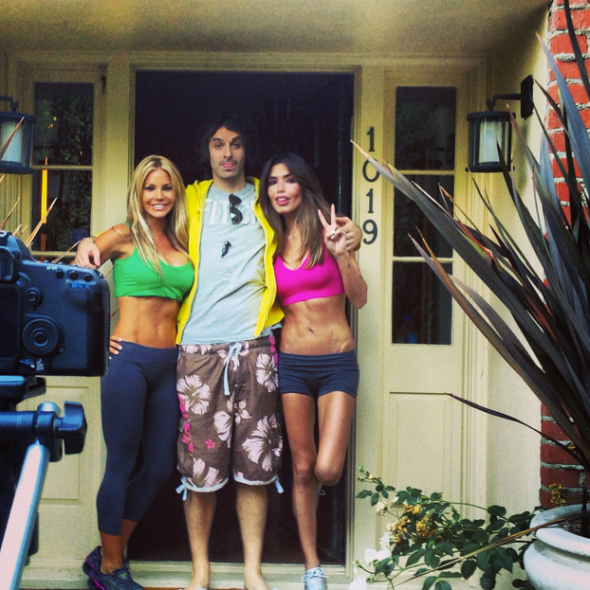