How are you today? I am good. That is nice. Long time no gibber. Hope you’re not sour. It’s been a month since we spoke last. So much gibber to flow. Where to start? Yesterday a guy at the coffee shop called out my name as Muck when my coffee was ready. Muck?! What a hoot. Now, what else…

First off there was the Fourth of July. That was great. Went to a barbeque and ate all sorts of hot dogs and burgers and stuff. Then I drank cans of Natty Ice, Bud and other American beverages. Later that night I went to Hollywood for some jigging. Now that was fun. The taxi man who drove me home was Chinese and couldn’t really speak English. As we drove along I felt vicious heartburn kick in from all the day’s various bits and pieces that I put in my mouth which were now sitting in my stomach. Some burn. Fire in my chest. Grimacing face. Blowing air. Trying hard to make it go away. The taxi man mistook this as me about to get sick. Looks in the rearview mirror. Swerves in to the side of the road. Grabs a plastic bag. Reaches into the back and tries to put it on my face. Like a horse bag over my nose. No clue at the time what he was doing so you can imagine my surprise at the whole situation, that’s for sure. My attempt at Chinese was as poor as his attempt at an English explanation so in the end we decided to part ways. On the downside I had to walk the rest of the way home. On the up, I was one hundred feet from my abode. When I got home the heartburn got worse. I think a can of Red Bull earlier in the evening did not help the situation. I started hearing two voices in my head. One normal. The other a loud, psychotic, rambling devil like one shouting at me. Thought I needed a priest or something. Had I been possessed? Who knows! May the July fourth be with you all. 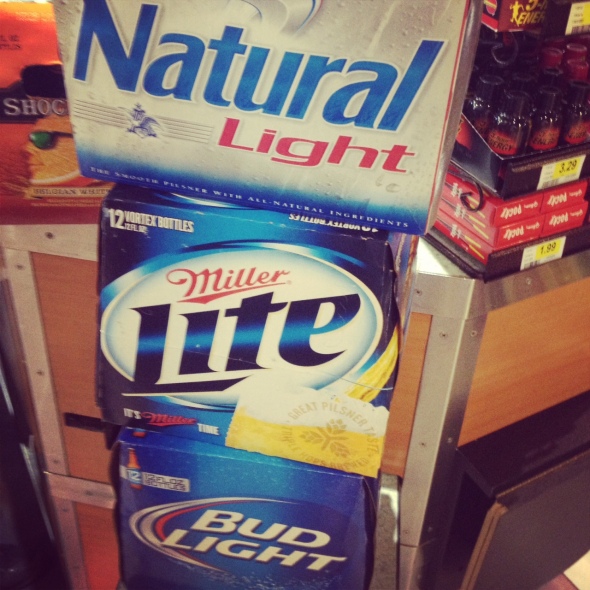 Later that week I ended up being introduced to Richard Lewis, he of comedy and Curb fame. What a sound man. Spent half an hour chatting with him in his living room. Talked about comedy and various projects. Advice. Tips. Work. Whole lot of gibber. Some stories. Told me that seven years earlier Larry David sat where I was sitting on his couch and asked him to be in Curb. “Well Mr. Lewis, today’s your lucky day…” RanDumb on! Swapped books with one another. Wise man as you can see from his inscription. Also exchanged email and numbers to keep in touch. Left a happy clown. Jigged on home. Looked at the email and number. Realised I couldn’t make out his handwriting. I’ve been phoning random numbers and emailing gibber to wrong emails ever since. Yee haw! 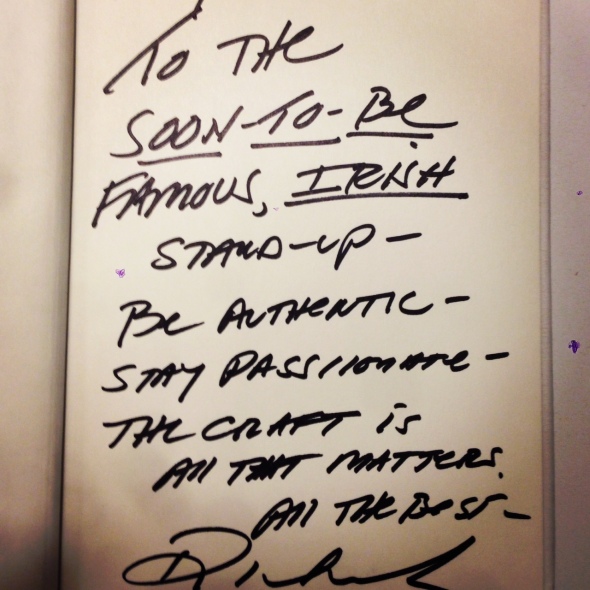 Speaking of which, my books are now Staff Recommendations at Book Soup, the mightiest bookstore in L.A. Wuu to the huu. 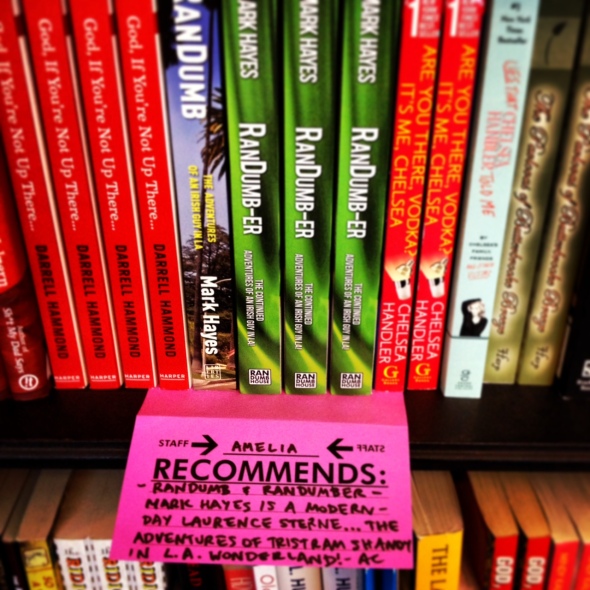 Trying to think of what else… Read this fine quote somewhere and wrote it down “For of all sad words of tongue and pen, the saddest are these: it might have been.” So that was great. Inspired me to write this poem, Melancholy:

I look out my window,

All I see is gloom.

If you looked in the window,

Very good, I know, thanks.

Also think I’ve finished a new book. That’s why I’ve been missing to be true. Head down. Write on. Just letting the final few chapters sit a few days. Hopefully good to go. Send her off to the editor. Sit back. Reap the rewards. Sow the awards. And be adored. All that glamorous author stuff. Great life.

Today I had an audition to be the face of a certain well-known booze beverage spirit. This would’ve involved ridiculous money, be flown down to Rio de Janeiro for the shoot, followed by the chance to do a series of them all over the world. How bad. They’re looking for a guy who could do a Scottish accent. I can do that, ochaye cannae wee one! Something along those lines. Also looking for a guy who looks like he might be in Highlander or Gladiator. Hmm. Asked if we could wear a kilt and a tight t-shirt to the audition. No kilt, so shorts on. No tight-tight t-shirt, so normal will have to do. Off I went. Find the casting house hidden in Hollywood. Stroll in. Check in. Stand. Sit. Wait. More people arrive, each one with a physical feature that makes them look like you, just after you went a round with a plastic surgeon. Must be how cows feel penned into the same place with genetically modified cows. Anyway. Door opens. Casting director comes out, followed by one guy who looks like he just stepped out of a Calvin Klein ad and another guy who just stepped off the set of the movie 300. Calvin Klein guy is putting back on his top. Hmm. That’s weird. Director calls out my name. In I go. Hear another name. Apparently we’ve been paired up. Calvin’s twin brother is called in as well. Oh great.

So we’re in the audition room. Grey. White. Modern. Well lit. Casting director runs through the gibber for the ad.

“We’ll have you sit here. Pretend you’re getting a tattoo. Stand there. Pretend this is happening. Girls are eyeing you up. Salute back. Smile. Done. Sound good? It does. Great.”

Stand on an x on the crowd. Start saying my name to the camera. As I do, the casting director shouts out,

Calvin next to me whips his off instantly, steroid chiseled body looking like Brad Pitt in Fight Club. Good for you, Calvin. I’m still standing there asking myself why I’ve never consider pec implants before now and also what the funk am I doing here again? As if he can read my mind the casting director shouts out,

“So you guys know the pay, right?”

“And if you’re picked you have a valid passport that will let you travel to Brazil and around the world? Gotta love the beach commercials.”

When he puts it like that… Off comes the top. Down at the Copa, Copacabana starts playing in my head. Beach on! Although now I feel like a right old piece of meat. Look over at Calvin. He’s been working out his whole life for this. I’ve been boozing all last night not knowing this. Try to adjust my posture. Shoulders up. Shoulders out. Shoulders down? Shoulders down? Can’t remember. Exhale and slump. And – “ACTION!”

So we sit. Pretend like we’re getting a tattoo done but too cool to show the pain. Then stand. As if we’re blagging our way into a bar. Topless. Then walk over to the bar. Pick up the two glasses filled with fake booze. Look around. See a couple of girls checking us out. Look over at them (the thermostat on the wall). Smile. Salute our glasses. Casting director wants to do a close up on me smiling. “Smile subtly but impress them but don’t be too cool but show you’re interested.” Oh right. I know that look exactly. Great direction. Give some sort of a smile. Says the same to Calvin next to me. Calvin adds in a couple of pec shrugs. Director asks me to do a bigger smile now this time. “Still be cool. But not too cool. Mid cool.” OK? Smile. “Bigger, more teeth.” OK. Cheesy grin. “BIGGER MARK, SHOW ME THE TEETH.” OK! Like a horse flashing his choppers, I push and grind and smile and flash and spit teeth at him. It’s a horrendous smile. Awkward. Pained. Topless. Face is hurting me. And, we’re done. Thanks? No thanks, OK. Out the door we go. Standing half-naked in a corridor. Mighty. Dress myself and run off out the door crying. Still waiting for the call back but I think I got it. (I believe in the power of feeling.) Really looking forward to Rio!

What else, I wonder? I wrote an article for The Irish Examiner on how I love Irish people offering my tour guide expertise to other Irish people who visit L.A, even those I don’t actually know. You can read that here -> READ ME.

So that’s about it. Great month or so. If anyone’s looking for me in this coming month I shall either be out and aboot shooting some gibber or else swooping in at my friend’s summer abode. Nay too shabby. 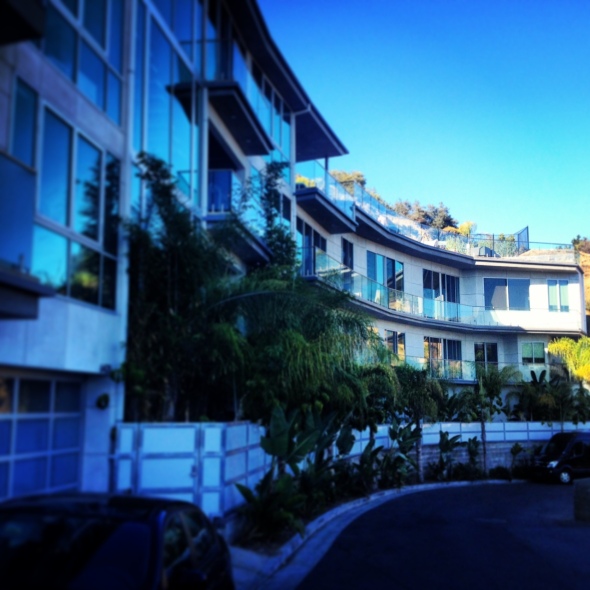 Oh yeah, one last piece of news. Mentioned last time I’m going to start a book club. Bookaduu! Maybe the last week of every month? Not sure of the day. Let me know when suits. Monday? Friday? Think the first book is going to be A Confederacy Of Dunces. Or Lucky Jim. Or Money. What thinks you? Yay, nay? Let may know in the comments (or twitter) below.

3 thoughts on “Muck Man vs The Adonis”