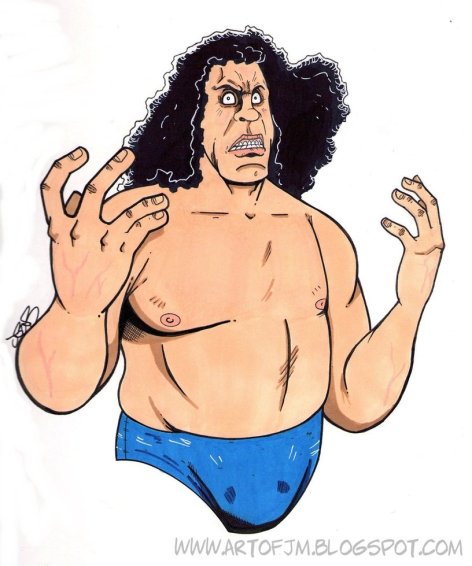 So I land. Collect my bag. Walk out the airport doors. Cross the zebra crossing. And hear a guy stuck in traffic shouting at me out of his mini van window. “Welcome to New York, you’re going to rock it in this city, am I right?!” Before I get a chance to reply Why yes sir, I certainly hope so! he adds on… “And I hope you get raped!!” OK? Thanks? Oh Jesus. I’m in New York.

I’m staying with my buddy Aonghus ‘Jimmy B’ O’Malley. He insists that it’s easier to get the subway to his abode over a taxi. OK. You should know. Except the train from the airport is broken. So now I’m on a bus. Full of weirdos. If the first thing you do when you arrive in a new city is get on a bus, things can only get better. They can only get better. Buses are horrible. Horrible. Creatures on the bus. Big man sitting across from me. No clue where he’s coming from but he’s in short shorts. It’s a cold night. Not sure what’s popping out of the short shorts either but it looks like a big fat breast with a weird nipple. I think it’s a scrotum and penis. It’s mank. And now he’s talking to me. At me. No clue. Funking buses.

Then I get on a subway. No clue what ticket to buy. Incident with ticket lady. She’s helping me, Johnny Tourist. Offers the guy in front of me at the queue help too with the machine. He’s not interested.

“You don’t look like you got this” she replies.

“Don’t you tell me what I got or do not got. I am a grown man, aight? Now go enjoy your ten dollar an hour job and leave me alone.”

23 an hour? Hmm. Could be a career option. Subway helper. Something to mull over while they keep fighting.

He shouts. She shouts. He screams. She screams. I start yelling Fuggedaboutit! And eventually I get my ticket sorted.

Subway felt dodge. Especially when you’ve luggage and valuables. Convinced people are out to rob you. Feels like a jungle. People with bags are defensive. You better fight me if you want this. Constantly feel like I’ll be mugged or pickpocketed in a new city. Be wide. Be wary. My Mum used to warn me. So I’m constantly asking myself Where’s my wallet? Oh Jesus Christ Almighty where’s my wallet??? Stop the train. Pull over the sub. My funking wallet is missing. I’ve been robbed!!! Oh. Other pocket. It’s fine. I’m OK. Sorry. Tap the head of this concerned little Chinese man next to me.

Realised I’m living in a white bubble in WeHo too. All nationalities here. All races. Minorities make up the majority. Obviously I think they’re all out to rob me. Just not used to being a minority. So it’s different. Took me a couple of hours on the subway. Turns out my buddy lives way down in Brooklyn. And it’s bin night. So the place stinks. Walking around lost. Wondering why I left sunny warm white L.A. But anyway. Loving New York so far.

So I came here for some meetings. Stand-up. And a New York TV festival going on that my buddy Steve is attending. His pilot was picked up by Comedy Central. Here to show it and premiere or do something or another. All these other stations at the event as well. Producers too. Place to network. Mingle. Swoop on. Steve tells me to come along to the events, we’ll figure out a way to get me in. Unless I want to pay a couple of grand to get an all access pass? Hmm. We’ll figure out a way. Arrive at the venue the next day. Steve shows me his Artist’s Pass. Apparently I need one of these. What to do? I know… Kinkos!  Let’s do it. So we go. Photocopy. Glue some paper together. And make me an all access pass. Fake ID style. Only cost me $15. Say nothing.

Events are mighty. Get info. Smooze. Chat up producers and TV executives like they’re the hottest girl in the room. Ha ha ha. That’s so funny. You’re hilarious. So bright too. By the way, I must tell you about my show idea… And away you go. It is awkward at times. At one point I’m at some cocktail party shindig. Next to me is the executive producer of the show Girls on HBO. Smart woman. Just finished giving a talk. Waiting for a moment to get a word with her. Awkwardly standing by while she talks to someone else. Pretending to be on the phone. Siri ruining it by screaming out “I don’t know what that means. Carrots and peas?” Shut up, computer lady! Ruining my ruse. OK. Focus. They’re about to finish talking. Now’s my chance to get a word with her. Charm. Chat. Sweep. What do I think will happen? I tell her about my show idea and she jumps on board right then and there? I think so. OK. Here goes. Up I go. Shake her hand. Give out a donkey laugh. Throw my head back. Remember that no one’s told a joke. So I tell a joke. Then ask her if I could get a minute with her. Must ask her something. She says sure. Balls. Wasn’t expecting that. What should I ask? I know, a weird long winded question that barely makes sense to me about a show structure specific to my show idea that I haven’t even told her about. She nods. Laughs. Winces. And hands me her empty glass. So that went well.

Thankfully I had some actual TV meetings set up too. They went well. Slow process all the same. “I like it, let me hear more, I’ll show it to this guy, send me on the full script, tweak this, how about that, let’s meet again.” That kind of thing. Chisel on, as they say.

Also had stand-up shows lined up. First one was one my second night. Go to the events with Steve. Head off for a show apres. Meant to be meeting Jimmy B. Except he’s stuck at work. Going to be late. So I find the venue. Somewhere in Manhattan. I’m lost. Clueless. Walking around scratching my head. Falling into those dodgy open cellar door things. Almost bust myself up badly at one point. Trying to get Google Maps working on my phone. Not looking where I’m going. Walk right into an open door in the ground. Thank Jesus there was a guy coming up the top of the stairs/ladder thing. Fell into him. Broke my fall. Which would have been down a dark abyss. Saved the day. Dodge. On. 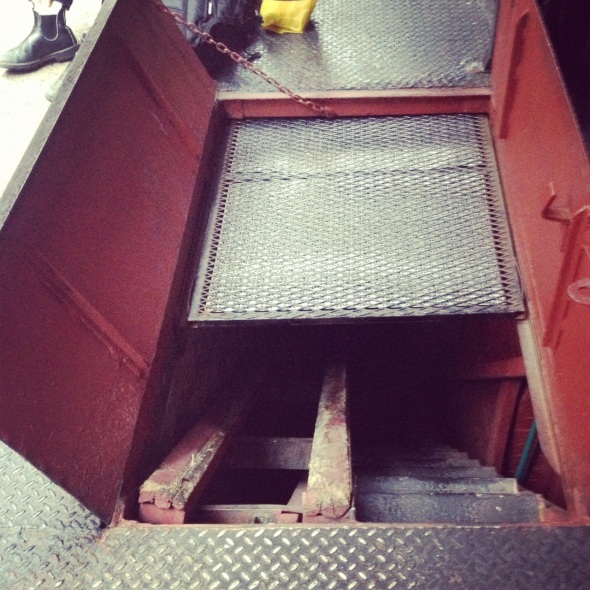 Anyway, I find the venue. Cellar of a bar. Go in to the bar. See the stairs at the far side. Head down. Past the toilets. Hear someone on a mic. Through a corridor. And I walk into the venue right next to the stage. Everyone sees my grand entrance. Comedian who’s on makes a point of it. I sit down quietly to avoid disturbing. Laugh off whatever he’s saying to me. Keeps going at it. Asks me what do I do? I’m a comedy scout. Shuts him up quickly. In his attempt to recover, he asks if I’ve seen the next big thing yet? Not so far tonight, anyway. His face drops again. Crowd start clapping and laughing. He asks if I think I can do better than him? Now that you mention it, I think I can. Ask if I can have a go. He can’t say no. Crowd with me. Up I go. Gibber. Do ten minutes. Can’t lose. They think I’m a randumb punter doing it for the first time. They’re loving it. Finish up. Dancing. Laugh. On! 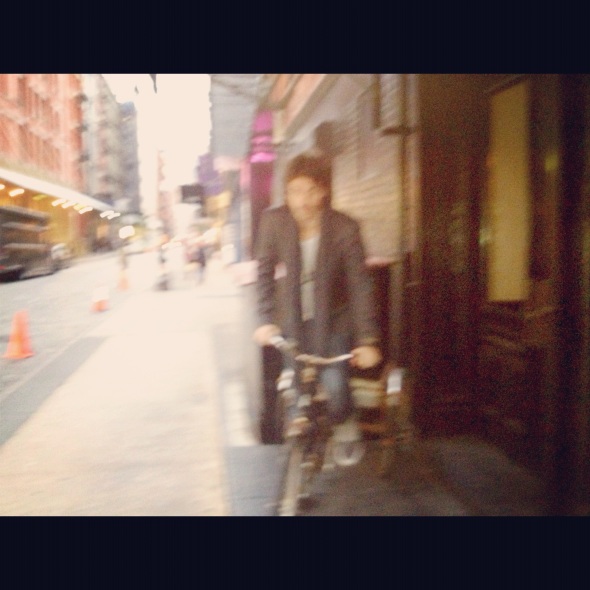 Get off stage. Wave the crowd good bye. Introduce myself to the MC guy. He thinks it’s part of my act. Loving it. I nod along. High fives all round. Wave them all off. An enigma, slipping back into the night. See ye lads! Check my phone. Where’s Jimmy B?! Still at work. Stuck for another hour. For funk’s sake. Tells me to wait where I am. He’ll come find me. Fine so. Except I’ve no clue really where I am. As in no clue where to go. Just made a great exit from the stand-up gig. Can’t go back again and ruin that. Decide to try a bar next door. Just started to rain too. Have a pint here and I’m gone. Except this seems like the world’s worst bar. Karaoke night on top. Full of dudes. Few dubious women. Mighty.

Bouncer stops me as I’m going in. This man is a giant. Literally. 7 foot. Giant like head. Looks like Andre the Giant. Tells me there’s a deal on pitchers. Cheaper than a pint. Odd. But. OK. So now I’m having a pitcher. And my phone is dying. So I’m hanging out next to the giant while my phone is charging at the only available socket. He’s watching UFC on TV. Pretending to do punching and wrestling moves to me. On me. On himself? Not sure. I think he thinks we’re friends now. Keep nodding. Slugging. Chugging. Checking my phone. Listening to some beast wail out Celine Dion. Jesus. This place is brutal. Where the funk is Jimmy B? Check my phone again. Andre the Giant pretends to do a karate chop into the air. Tells me to stop checking my phone. Let it charge. I laugh. Nod. Turn to him. And he sneezes fully into my face. It. Was. MANK!

But what could I do? He’s a giant. A harmless vicious giant. Hands me a napkin. Apologises. Sits down back in his seat. Well I’ve had enough of this place. Pitcher gone. I’m out of here. Not sure where I’m going. Home. Jimmy B still at work. Gone midnight. Raining. Cold. Funk New York. I’m up in eight hours. I’m done. Walking. Somewhere. I’ll figure out how to get home. Wherever that is? The bottom of Brooklyn. Trudging through Manhattan. Muttering. Stupid New York giant. I wonder if I’ll catch something. LA is way better.  Where are all these New York models I was warned about?! Tut. Mutter. Splutter. Scutter. Although. At least I’ll get a story out of the giant. Always that. Not so bad. Could be worse. Carry on! Phone rings. Jimmy B. Finally. Finished work. Picks me up in a cab. Away home we go.

So. To recap this gibber: I fell down a hole. Made a fake ID. And a giant sneezed in my face. Good work, New York! Those were the main points anyway. I think. Did stand up at another venue that also turned out to be a poetry night. Headlining with a prestigious award winning Kenyan poet. Apparently. Recited some of my fabled Irish poems. Went down well. Unlike the pub the next night where Jimmy B had to pay off the bouncer to get us in. Effect of having three guys and no women in the group. Expected the place to be unreal. Nay. Dingy dive bar. Couldn’t understand it. Well worth the $30. Place full of guys who bribed their way in. Manhattan strikes again. I went to a pub where they only serve dark or light beer. Oldest pub in New York. Apparently. Oh. I also met a mouse named Mick. Nice chap. Thankfully I left the day before Hurricane Sandy arrived. Dodge. On. And now. I’m on another plane. Well. More of a jet. The private kind. Say nothing. Duu. Pants off. Caribb. On! 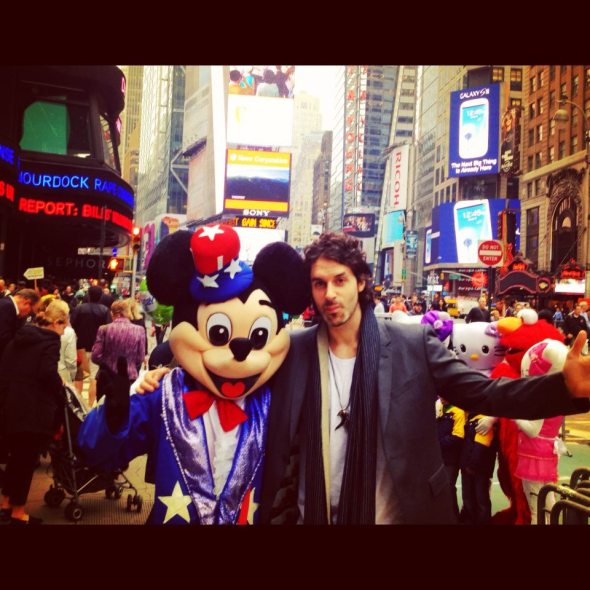 6 thoughts on “Boys Town To Manhattan!”