So it’s Labor Day. End of the summer. Bank holiday weekend. Sunday night. Big party. And I’m DJigging classic Irish folklore songs. Put on my finest whitest rags. Pack up my equipment. Stroll up the ridiculously steep street I live on. And I’m at the SkyBar. Ready to go. I kind of got ready really quickly just before I was meant to be there so didn’t cop on that I was in all white. Looking very tampon like. Not my normal attire. Enter through the velvet rope. Meet the manager. Asks me if I’m pumped. I pretend I am. Informs me it’s going to be a huge party. One of their big three. Halloween. Christmas. White Party. Oh right. So it’s going to be a big one? Oh right. Dance on!

Early start. Nine bells. Not expecting it to be busy. Poolside looking very dapper dressed in white. White flowers floating in the pool. Savage view of all of L.A sparkling over the side. All very decadent. Top bar is looking cool. Staff all in white too. Looking sharp. Or glamorous. Depending on their chromosomes.

Set up. Plug in. Good to go. Just keep it chilled for the first two hours I’d say. Parties are notorious for getting going late here. Start late. End early. The two o’clock cut-off time is still one of L.A’s worst flaws. Anyway… And a one and a two and away we go! Music. On.

Two songs in, the top bar is half full. Hmm. Interesting. This is early. Half nine, bar is full. Ten bells, whole place is pretty busy. Half ten, the place is full. Oh Betsy. We’re in for a dancer. Rich men. Ridiculously hot women. Both sexes are quite spoilt in a way in L.A. The amount of good looking women who know how to dress the part is ridiculously high in L.A. On the flip side, there are also lots of men with lots of money? Does that even things out? Who knows.

By now it’s half eleven and the place is jumping. Music is prancing. People are dancing. Poolside. Bar side. Up on tables. The whole shebang. Quite mighty. As was the fact I wasn’t boozing. Sipping away on some water. August has been a tough month. Well, not tough as in I’ve laboured it away laying bricks and building houses on my own. Tough as in I’ve been wined, dined and high life’d beyond belief. Party on Wayne, as they say. (Hat-tip to The Man, knows how to do it in style!)

So it’s been a tough month in that sense. Not just all surface fun either. As in I’m not just going to these ritzy restaurants or hidden garden parties and then going home and lying in bed all the next day wallowing my life away. Nay nay, I have actually been working too. Writing has been ongoing. Next step of my plan has been flowing. But that’s for another day. Back to Sunday night. And me not boozing. Until my buddy Dan Miguel shows up. He had been DJing all day himself. Just finished a set. Scootered up to me. Bar manager comes over just as Dan Miguel arrives. Offers us a drink. Weak. Man. Flower. OK so, shur I’ll have the one.

Thing is about the SkyBar, one drink is pretty small. The regular glasses are about the size of a bathroom glass. (You know those small ones you rinse your mouth out with? Do they have them in America? More great rambling, thank you.) Also, the drinks are not made that strong. At all, at all. In fact, if push came to love, I’d say they were ridiculously weak. But what do I know about booze. Oh yeah, and if you were buying these drinks, you could also say they were pre-tty expensive beyond belief. But what’s money to me and you. Thankfully, complimentary drinks are a perk of DJing.

Anyway, my point is my drink was small and not strong. In the space of the next two and a half hours, I had four of those drinks. I also had one mouthful of champagne – at one point a $400 bottle of Dom Perignon was brought over to the DJ booth as a thank you for playing a song that was never actually played, say nothing. Tricks Hayes, peau peau! As nice as it was, I wasn’t in the mood for full on boozing, so just had a sip purely to be drinking champagne from the bottle at such a nice event so I could write about it in a cliched way at some point down the line. Like now. At times I am a weak, dumb man.

Oh yeah, I also feigned a few slugs from a bottle of tequila. Some high roller girl with a top table was strolling around with it, loving the music so kept wanting to give Dan Miguel and myself a sup from the bottle as a salute or a sign of solidarity or I don’t know why she was giving away booze. Initially I politely batted the offer away but when she persisted I took the bottle, turned my head, left the top on and pretended to sip. As I imagine you would fool a two year old into drinking a bottle of milk. She bought it. And loved it. So kept coming back with it whenever she was passing by. Who’s the fool now, says you. As I said, at times I am a…

Anyway, place is hopping. Everyone having a good time. White. Night. All. Right. Two bells. Early doors. But. Party’s over. Done. Dusted. Good duck. Myself and Dan Miguel get ready to head off. Pack up our stuff. He has his gear. Plus a speaker. I have my gear. Plus a speaker. Lots of gear. Get ready to leave. Say goodbye to the bar staff. Stroll away. Gear. Speaker. Me. Loaded up. By the top of the steps of the top bar leading down to the pool. I go first. Right foot forward. And then…

Somewhere in Beverly Hills. Seriously. An actual earthquake. Small. But a quaker. Roughly around that time. Let’s just say exactly at that time. Seeing as I don’t know how else the next part happened. Maybe a wet floor. Not sure. But. Stepped down a step. And then…

Speaker. Gear. Me. The lot.

Into a bush a we go.

Body contorts. Juts. Wenches. Jars. End up still standing. I think. Not sure. Because I can’t actually fully remember. In fact, I can’t remember the whole next part either. The bit where I put my gear back into the DJ booth. Put the speaker back by the bar. And then just go home. Where I might have taken another tumble. No clue. I think my body reacted to a dodgy situation by going into homing mode. Off I went like a pigeon. Must. Go. Home.

All I remember is waking up the next day after I weird night of sleep. Kept dreaming that I was running and had a stitch. Over and over again. Pain in my side. Oww. Some weird dream. Woke up. Still had a stitch. Hang on, this isn’t a stitch. I know what this is… Feels like that time I was playing hurling (kind of like lacrosse but faster and more brutal) and someone belted me across the stomach with their hurley – Broken ribs!

Thing is, I still can’t remember anything from being at the top of the stairs to waking up in my bed. Earth shook. I slipped. Stayed on my feet though. Woke up gear-less. With a broken rib. Thankfully gear has been recovered. Safely tucked away. The fact I left it there is not like me though. At all. And I wasn’t drunk. Four watery boozes just isn’t nearly enough for that to happen. The lack of a hangover has me a bit paranoid and suspicious too. In turn that has my brain going OCD. Now have a new quirk/dumbness: Must turn off light switches with my right hand. Well dumb, brain. All very odd. Lots of rambles. But I haven’t blogged in a while. So wanted to spit something out.

Anyway, that’s my tale. One which has me flummoxed. But no need to worry. Dancing on!

And now here’s a photo of people awkwardly posing at said White Party.

[Two day add-on: Went to see Louis CK last night. Not a great call with a broken rib. Some funny man, laughing for an hour. If he’s coming to your town, go see! Some of his new stuff is genius. Felt my first proper earthquake tonight as well. Coincided with me falling off the toilet. Quaked. Rattled. I rolled. Add a bruised tailbone to the injured list. Great update. Thank you.] 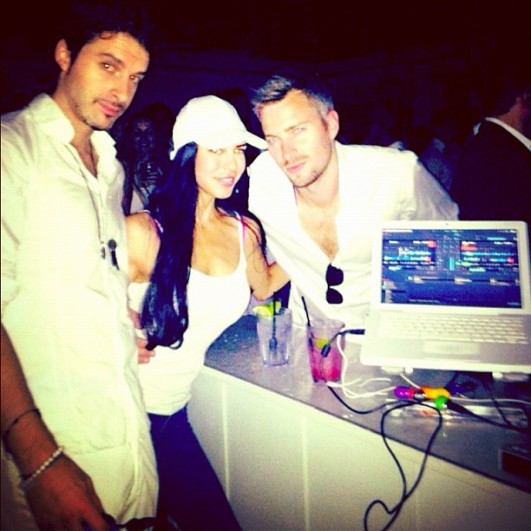 2 thoughts on “My McRib”